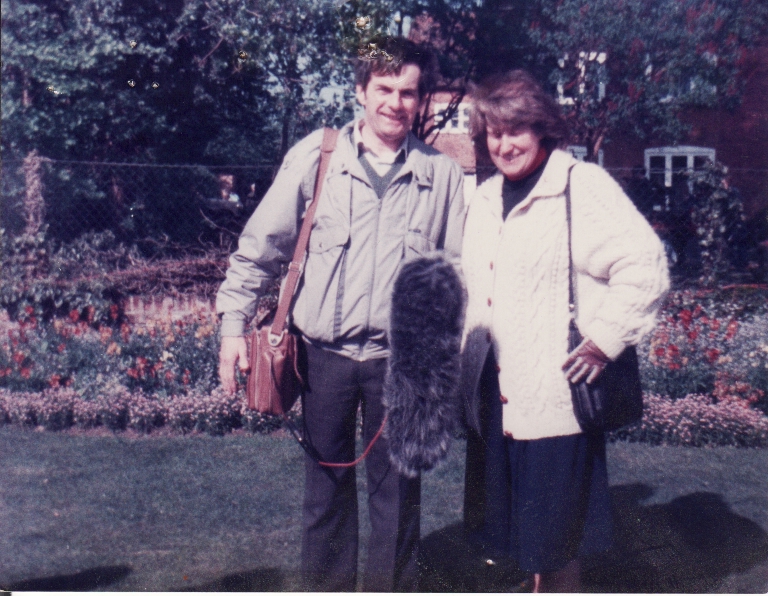 2020 will go down in history as the year that never happened! Of the many events and functions that were cancelled, probably the most important were those relating to the 75th anniversary of VE Day, due to take place on the Friday 8th May, (which had been designated a Bank Holiday).

It was different 25 years ago, in 1995, when celebrations for the 50th anniversary took place.  Mary, (my wife) and I recorded interviews with the organisers of a number of the exhibitions and events to make one 30 minute side of the May edition of the Harrow Talking Magazine.

We looked at the various events that were planned and came up with the following list….

Contact was made with the organisers of these events and at West House, Ken Kirkman, then Chairman of PLHS, explained to Mary that the exhibition showed the home front. The exhibits were set out on a Morrison Shelter – basically a large metal table about three feet in height with side panels of strong wire netting, for indoor use only. When there was an air raid, the occupiers of the house would make themselves ‘comfortable’ under the table, so that they would be safe from any debris from bomb damage, which would land on the very strong table. Since the war, the shelter had been in use in a PLHS member’s garage. During the interview Ken explained about the Shrine in West House which lists those who died in Pinner during WW2.

When edited, the recording was split into two parts with the second part covering rationing, and an explanation of the Air Raid wardens post. The overall aspect of the exhibition was nostalgia, but some visitor’s didn’t like to hear the recording of ‘All Clear’ siren being played as it brought back bad memories.

The barrage balloon being flown in Pinner Memorial Park turned out to be quarter size, but even then it was 16 feet long by five and a half feet in diameter! In the interview, Derek Fullalove from Pinner Rotary explained that the balloon was filled with balloon gas which is low grade Helium and flown at around 150 – 200 feet. There was no problem with the balloon interfering with aircraft.

At the Museum, Helen explained that the exhibition was about Harrow and the Home Front, including Civil Defence items. The displays included an incendiary bomb (not live) and tins of food associated with wartime, such as dried egg.

The last specially recorded item was the lighting of the beacon on Harrow on the Hill. The peal of bells of Harrow church rang out at the start and then the Vicar of Harrow explained the order of events and said prayers before the two minute silence after which the beacon was lit and a single bell rang out 24 times in memory of the civilians who had died in the area during the war (as listed in the Book of Remembrance in West House).

On the Bank Holiday Monday, a once in a lifetime recording was obtained. While at the Museum in the afternoon, I saw the Lancaster which had flown along the Mall dropping petals earlier, flying westward (this aircraft together with the Spitfire and Hurricane of the Historic Flight were based at RAF Northolt for the duration of the celebrations). As we got to our house in Althorpe Road, I was aware of an aircraft flying low and approaching from the west. Luckily I had my recorder with me, so I switched it on in time to record the Lancaster flying right overhead banking into a right hand turn to get onto the alignment for the runway at Northolt!

After editing, a running order was prepared and a linking script written for the presenter, Bron Wild. Other material was added including a couple of songs by Vera Lynn; a speech by Churchill; a snippet from ‘Much Binding in the Marsh’ (a wartime comedy show) and a snatch of ‘Lilly Marlene’. The 30 minute side ended with the ‘All Clear’.

However, this wasn’t the end of story. Later in the year, an eight minute selection of items was entered into the magazine section of the annual competition for talking newspapers/magazines organised by the Talking Newspaper Association of the UK, the then national organisation for TNs. It won first prize – £250 and an engraved crystal glass plaque, which is on display in the Harrow Talking Newspaper studio. (After the award was announced, there were a number of requests for copies from other TNs and TMs).

All told it was a great experience to be involved in the celebrations and to produce a special edition of the Talking Magazine which was appreciated by the listeners.